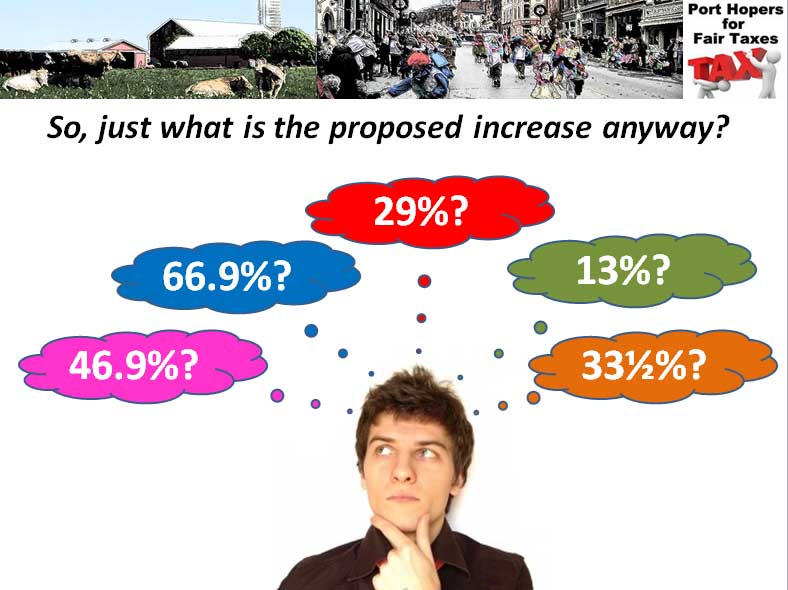 Port Hope, ON (March 10, 2014) –  It’s hard to keep up with all the potential Port Hope tax increase numbers swirling around.

At the October 21, 2013 Municipality open house on Area Rating Taxation, staff presented Options 1-6 which included a 46.9% tax increase for Port Hope’s rural Ward 2. That rocketing increase was not palatable to Ward 2 ratepayers so it was back to the drawing board.

In the meantime, Port Hopers for Fair Taxes held a public meeting at the Lions Centre on Oct. 28th where an “Option 7” was proposed and explained with details to demonstrate it met the criteria of being fair, equitable, implementable and in compliance with legislation. Based on available data, Option 7 presented a minimal increase in the Ward 2 taxes.

On November 13, 2013,  Ian Angus, of Port Hopers for Fair Taxes, accompanied the Mayor, Deputy Mayor, two councillors and the member of Port Hope’s Finance Department to the City of Hamilton on a fact-finding trip to learn from Hamilton’s experience of effectively dealing with Area Rating.

On November 26, 2013, Council approved that an Area Rating Focus Group be formed. The Focus Group held 5 meetings in December 2013 and developed evaluation criteria and principles to be used when analyzing 29 services/departments in order to determine if they would qualify to be considered as a “Special Service” and therefore area ratable. The Evaluation Chart of 29 services/departments developed by the Focus Group was to be filled in by residents and used as part of the community consultation process.

In January 2014,  Area Rating Surveys with the 29 line items from the Evaluation Chart were sent out as bulk mail to households in the municipality.

On January 28th, Port Hopers for Fair Taxes held a second public event at the Lions Centre. Many residents had just received the survey and were confused by the format and questions. The PHFFT’s event covered the principles of area rating; a review the survey’s four pages of costs, and examples of each category; and answered questions to help people decide for themselves which costs should be area rated.

On February 18th, the Director of Finance, David Baxter presented the “Area Rating Stage 1 Completion Update” report to Council. The 818 residents who filled out the survey had voted overwhelmingly in favour of considering all of the 29 services/departments in the survey as an area ratable “special service” instead of “common”. However Mr. Baxter’s report had reduced the required 29 line items in the survey to 17 combined items and contrary to the survey feedback received,  the staff report was not in favour of area rating in the majority of the services/departments. The report recommended only transit, and Christmas tree pickup as being a different level of service and therefore “Special” and area ratable.

On March 5th and 6th, the municipality held four Taxation Review open houses, where the latest increase scenarios were presented. And in contrast to the citizen survey results, the staff report had the majority of the services/departments listed as “common” on the wall charts.

Mayor Thompson tried to calm fears of a large tax increase by saying that the options presented in the slideshow would only increase taxes by 13%. However, upon examination, this lower sounding increase was due to the Mayor lumping the municipal portion tax increase together with county and education tax rates and using the total tax bill as the basis for the increase calculation.  It was an apples to oranges comparison, when instead, for clarity, all comparisons need to be apples to apples and therefore on the municipal portion only.

At the open house, Director Finance, David Baxter, answered 33.5% when asked what the actual tax increase would be if the items in his slide presentation were approved.

If all of these moving numbers have your head spinning, then Port Hopers for Fair Taxes invites you to come out to their free public event, “Port Hope Taxes 101”, at  the Lions Centre on Tuesday, March 18th at 7pm. Whether you’re a Ward 1 or Ward 2 ratepayer, the information to be presented should help you decipher what the numbers will mean on your tax bill.